Trading volume on crypto exchanges in India has taken a large hit of more than 70% since the start of the 1% TDS rule.

As reported by The Economic Times, following the start of the 1% TDS rule, exchange trading volumes in India have plunged down.

TDS here stands for “tax deducted at source.” The 1% TDS rule that went live on the 1st of July requires the sender of any type of crypto transaction in India, to pay 1% of the total amount as tax.

This is part of a series of controversial digital asset regulation laws that were passed in the country earlier in the year.

Back in April, a law stating that 30% of the income coming out of crypto transactions has to be paid as tax went live. Then, the trading volumes on the major Indian crypto exchanges reacted with a decline of around 40-80%. By the 12th of that month, the volume on the exchanges had already reached a six-month low.

Now, the TDS rule going online has meant that the trading volume has seen a drop of more than 70% on many exchanges between 30th June and 3rd July.

The Binance-owned WazirX, one of the most popular exchanges in the country, saw a sharp plunge of around 82%. CoinDCX observed an almost 70% decline, while ZebPay saw a drawdown of about 76%.

WazirX vice president Rajagopal Menon argues, however, that it is still premature to predict the effects of the rule, and that things will be better understood by the 2nd week of this month.

Menon adds, “there has been a fall in trading across the industry as investors shift to hold and there may be another dip as traders see their capital getting locked while trading on KYC-compliant Indian exchanges.”

According to The Economic Times, some industry insiders expect the trading volume to continue to decline due to the current bear market environment.

At the time of writing, Bitcoin’s price floats around $19.7k, down 5% in the last seven days. Over the past month, the crypto has lost 33% in value.

The below chart shows the trend in the price of the coin over the last five days. 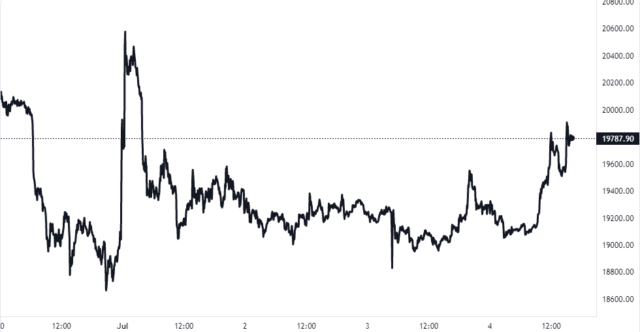 In the past few days, Bitcoin hasn’t shown much movement. Besides a very short lived spike above $20k, the coin has mostly consolidated around and above the $19k level. Withdrawal your bitcoin from exchanges