The key differences between P2E and M2E are the rewarding system and the revenue model.

As you can tell, there are some differences between the P2E model and the M2E model. Both of them are so much more than virtual gaming, that’s for sure. 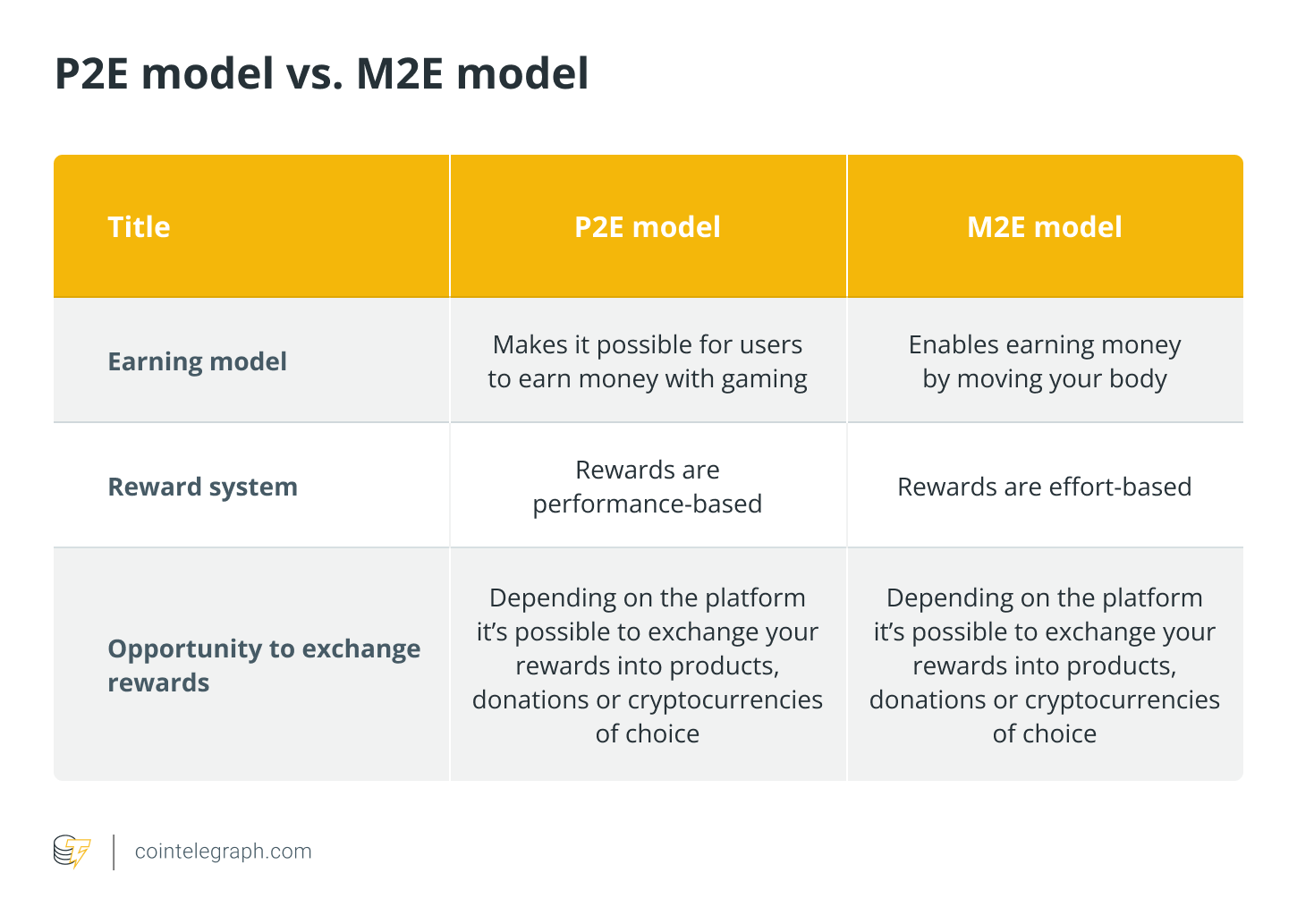 P2E is expected to transform from a trend to a mature concept. The gaming industry is exciting, but it should not be forgotten that relaxation and community engagement should remain central. Real gamers care more about the game and the graphics than about the revenue model.

M2E is also gaining momentum in the scene. For users who struggle to get enough exercise, a revenue model could be just the motivation they need. However, the move-to-earn concept is still at the beginning of its journey, so we will have to wait and see what the future brings.

What are the examples of move-to-earn (M2E) games?

Examples of move-to-earn games are STEPN, Sweatcoin and MetaGym.

As the move-to-earn industry is getting bigger and hotter, it’s time to make you familiar with some of the M2E games. The most well-known example of M2E is probably the Solana-based move-to-earn project STEPN (GMT).

STEPN is a Web3 lifestyle app with integrated SocialFi and GameFi functions. The project is born to make users healthier and wealthier by putting each foot in front of the other. Founders are really aiming to be the number one M2E project in the Metaverse space and even won the Solana Ignition Hackathon in 2021.

If users want to start using STEPN, they need to invest in a pair of STEPN sneakers by buying an NFT. When you accomplish the first step, it’s important to move and track your steps with GPS. The earned in-game valuta can be exchanged for crypto later on.

The second project is kinda similar to the first one: Sweatcoin. Users earn their coins by running, walking and most of all: sweating. Every 1000 steps you take will get you a reward in SWEAT, the platform’s native currency.

With their slogan, “It pays to walk,” they want to decrease the billions of dollars of cost in healthcare by making people healthier. Users can exchange the rewards they earned for products, make a donation or convert them into a currency of their choice.

The last example of the M2E projects is MetaGym. MetaGym is easy to join with the possibility to earn money while moving your body through an app and even a smart-watch application. Users get to utilize GameFi, FitFi and SleepFi functions while making themselves sweat to earn MetaGym Coin (MGCN), the platform’s own token.

MetaGym wants to help the world become a healthier place, but they’re not afraid to give you the chance to earn some money while doing it. Users earn cryptocurrencies while completing tasks like finishing cardio or strength training or getting some satisfying sleep.

What are move-to-earn (M2E) crypto games?

Move-to-earn combines moving, gaming and earning crypto on the blockchain.

Move-to-earn boomed during the height of the COVID-19 pandemic. People were mostly at home, sitting and spending their time behind the screen. Since it’s essential to move frequently for your health, M2E got really popular. It’s a new way to reward users for getting up and starting to move while using technology. Every move you make, you will earn cryptocurrency.

Maybe over the years, this M2E trend will transform into FitnessFi instead of GameFi, because of this concept’s potential and people’s willingness to be healthy and stay active due to the health problems created by the recent pandemic.

What are the examples of play-to-earn (P2E) games?

Axie Infinity, Aavegotchi and The Sandbox are examples of play-to-earn games.

One of the most known examples of crypto games is Axie Infinity which is based on the Ethereum blockchain. It’s a combination of video gaming and blockchain gameplay elements. On some days when the economy was thriving, the NFT marketplace was a booming business. Millions of dollars were being traded and Axies, the magical creatures, were being sold for thousands of dollars each.

Aavegotchi is another example of a P2E game. It describes itself as an open-source community-owned NFT gaming protocol. Users can go on adventures as pixelated ghosts, which is reminiscent of the Tamagotchi games. You can earn tokens with minigames, trade Aavegotchis or start with rarity farming.

Another game in the P2E industry is The Sandbox. This platform offers its users a unique game experience that gives them a sneak peek of what the Metaverse probably will look like. Users can play, create, build and own the future. While enjoying the immersive experience, users can monetize the game by creating, investing and earning in-game assets.

What are play-to-earn crypto games?

Play-to-earn (P2E) crypto games are giving users the opportunity to earn in-game assets that can be exchanged for cryptocurrencies.

P2E is a new component of the GameFi ecosystem. Normally, users are gaming online while using apps or websites like Minecraft and Roblox. But, the P2E trend takes it all a little bit further.

By using blockchain technology, it’s possible to combine gaming with the benefits of crypto. Traditional gaming allowed participants to relax, enjoy the graphics and spend some time off with friends. From now on, you can enjoy gaming with another important aspect of life: earning money.

It’s essential to play on a blockchain to earn crypto tokens or nonfungible tokens (NFTs). Additionally, you don’t necessarily have to invest in expensive NFTs to earn crypto and be part of the in-game economies and business models.